Pork prices continue to fall, the agency predicts that the CPI in October may break "1" again after 42 months

Sino-Singapore Jingwei Client, November 10 (Dai Congfei) On the morning of the 10th, the National Bureau of Statistics will announce the Consumer Price Index (CPI) for October. Many institutions predict that the CPI may break below "1" in October. The Sino-Singapore Jingwei client combed and found that if the above forecast is fulfilled, the CPI will return to below 1% after 42 months.   Data 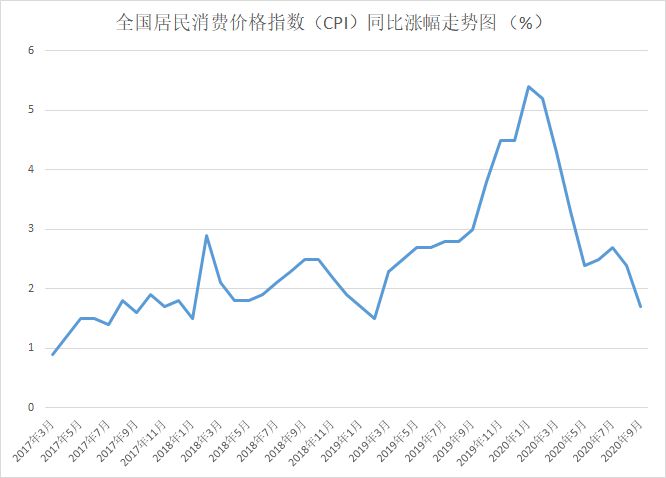 Sino-Singapore Jingwei Client, November 10 (Dai Congfei) On the morning of the 10th, the National Bureau of Statistics will announce the Consumer Price Index (CPI) for October.

Many institutions predict that the CPI may break below "1" in October.

The Sino-Singapore Jingwei client combed and found that if the above forecast is fulfilled, the CPI will return to below 1% after 42 months.

Institutions forecast an average increase of 0.8%

In the first three quarters, the CPI rose by 3.3% over the same period last year, and the increase was 0.5 percentage points lower than in the first half of the year.

Since July, CPI has continued to fall and returned to the "1 era" in September.

Dong Lijuan, a senior statistician in the City Department of the National Bureau of Statistics, analyzed at the time that the prices of fresh fruits and vegetables have risen due to the superimposed effects of seasons and festivals.

Among them, the largest forecast value is 1.1% given by Southwest Securities, and the lowest is 0.5% given by Guosen Securities.

CICC believes that the fall in pig prices has dragged down the CPI sharply.

In October, the average wholesale price of pork from the Ministry of Agriculture fell off-season from the previous month, and the year-on-year growth rate turned negative.

The price of staple food was stable.

Service prices such as rent and travel may improve slowly.

The year-on-year growth rate of CPI in October is expected to drop to around 0.5% from 1.7% last month.

Zheshang Securities predicts that under the effect of the high base of pig prices, the CPI will fall below “1”.

Due to the deterministic rebound in the supply of live pigs, the price of pigs is pushed down, even if the price of food rises slightly, the impact on CPI will be small.

Industrial Securities also believes that base factors may promote a significant decline in CPI year-on-year.

In October last year, there was a relatively strong base factor. At the same time, judging from high-frequency pork and other food price data, the October CPI is expected to fall significantly year-on-year.

Galaxy Securities pointed out that the carry-over factor in October was 0.8%. In October, the new price increase factor was estimated to lower prices by approximately 0.04%. After rounding, the CPI is expected to increase by 0.8% year-on-year.

At the same time, considering that some of the new price increase factors are difficult to make an accurate estimate, the fluctuation range is 0.7%-0.9%.

Since August, pork prices have continued to fall.

According to the monitoring of the Ministry of Agriculture and Rural Affairs, the average pork price in October was 42.5 yuan, down 10.3% from the previous month.

The price index of vegetable basket products in October was 122.58, a decrease of 2.46 percentage points from the previous month.

Source: Screenshot of the official website of the Ministry of Agriculture and Rural Affairs

The price of pigs may continue to fall as the contradiction between supply and demand eases, and the impact of the high base in the same period last year is superimposed. It is expected that the CPI will continue to fall to 0.9% in October.

Regarding the future trend of pig prices, Zhuo Chuang Information stated that there is no shortage of rising possibilities in November, but the increase is limited.

Chen Guanghua, deputy director of the Animal Husbandry and Veterinary Bureau of the Ministry of Agriculture and Rural Affairs, said at a press conference on October 21 that the pork supply situation will get better and better in the future.

Chen Guanghua predicts that, taking into account factors such as the recovery of live pig production, pork imports, and changes in consumer demand, during the New Year’s Day and Spring Festival next year, the supply of pork will increase by about 30% year-on-year, and the price will generally be lower than the level of the same period of the previous year. There has been a sharp increase in prices.

CPI may remain down

Regarding future price trends, CITIC Securities said that the October CPI reading may be around 0.9% year-on-year, and it faces a certain risk of deflation.

Southwest Securities believes that in September, affected by the narrowing of food prices, the CPI entered the "1 era" year-on-year, and the base effect will increase significantly after October, and the CPI may continue in the "1 era" during the year.

Oriental Golden City further pointed out that CPI inflation may continue to decline in the fourth quarter, and PPI deflation is expected to continue.

It is expected that the year-on-year increase in pork prices in the fourth quarter will continue to shrink, leading to a decline in food price growth. In addition, supply recovers faster than demand, non-food prices are unlikely to rise significantly in the short term, and the CPI inflation rate may continue to decline.