A set of data tells you that the country's development in the "13th Five-Year" five years has become increasingly new   The "13th Five-Year Plan" period is the decisive stage for my country to build a moderately prosperous society in an all-round way. In the past five years, my country has fully implemented the new development concept, promoted deeper reforms, implemented a higher level of open 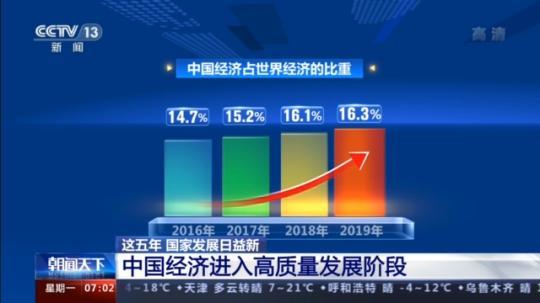 The "13th Five-Year Plan" period is the decisive stage for my country to build a moderately prosperous society in an all-round way.

In the past five years, my country has fully implemented the new development concept, promoted deeper reforms, implemented a higher level of opening up, sustained and healthy development of the national economy, and continued to emerge major scientific and technological achievements. The results of poverty alleviation have attracted worldwide attention, the environment has become more beautiful, and the people's livelihood protection has become more effective.

This has been five years of struggle and also a brilliant five years.

During the "13th Five-Year Plan" period, my country has made brilliant achievements in various economic and social fields, and my country's institutional advantages have been continuously transformed into national governance efficiency.

China's economy has entered a stage of high-quality development

Zhang Liqun, researcher of the Development Research Center of the State Council: During the 13th Five-Year Plan period, China's economy is an important transition period. Periodic, institutional and structural contradictions are intertwined, and downward pressure on the economy is increasing.

With the changes in the main social contradictions, China's economy has begun to shift from high growth to high quality. We are in this critical period of transforming development mode, optimizing economic structure, and transforming growth momentum.

In the past five years, China’s economy has focused on supply-side structural reforms, focusing on building a modern economic system, and promoting changes in the quality, efficiency, and power of economic development.

At the same time, a number of reforms have been advanced in depth, the business environment has continued to be optimized, tax reductions and fee reductions, and financial services to the real economy have achieved significant effects, and the dynamics of economic and social development have further increased.

According to estimates, my country's fiscal revenue during the 13th Five-Year Plan period is about 88.6 trillion yuan. A series of tax and fee reduction measures have allowed enterprises and individuals to enjoy policy dividends.

From 2016 to 2019, my country's expenditure in key areas such as education, social security and employment, health, housing security, energy conservation and environmental protection increased from 9.6 trillion yuan to 12.4 trillion yuan.

During the "Thirteenth Five-Year Plan" period, agricultural infrastructure has been continuously consolidated, providing an important guarantee for achieving food security.

It is estimated that by the end of 2020, 800 million mu of high-standard farmland will be built in the country with drought and flood protection, stable and high yield.

In the past five years, my country has continuously added 17 pilot free trade zones, bringing the total to 21, and 260 institutional innovations have been replicated and promoted throughout the country.

In the past five years, my country promulgated the Foreign Investment Law and its implementation regulations, and formally established the pre-access national treatment plus negative list management system at the legal and regulatory level.

The quantity and quality of China's technological innovation are rising

In the past five years, my country has made a number of major original achievements in basic research and key core technology research fields such as quantum information.

In the past five years, the Fuxing high-speed rail was put into operation, the Hong Kong-Zhuhai-Macao Bridge was officially opened to traffic, 5G took the lead in commercial use, and the application of innovations in artificial intelligence, blockchain, new energy and other fields was accelerated. The support of scientific and technological innovation led to high-quality development.

The formation of a strong domestic market is accelerating. In 2019, my country's total retail sales of consumer goods reached 41.2 trillion yuan. China has become a super-large-scale market, and the final contribution rate of consumer spending to economic growth has remained at about 60%.