"Second Brother" drops in September CPI or returns to "1 era"

China-Singapore Jingwei Client, October 15 (Dai Congfei) On the 15th, the National Bureau of Statistics will announce the Consumer Price Index (CPI) for September. Domestic institutions generally predict that the CPI will continue to fall in September or return to the "1 era". Institutions forecast an average increase of 1.8%   In August 2020, the CPI rose by 2.4%, 0.3 percentage points lower 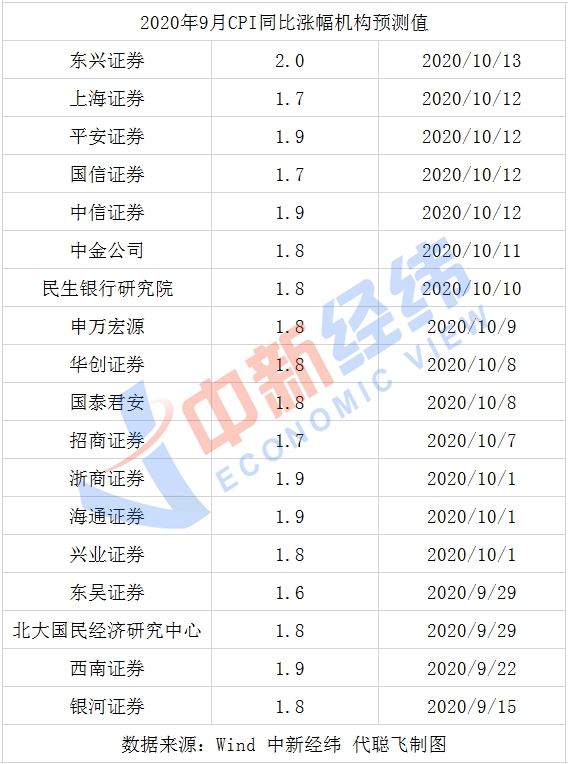 China-Singapore Jingwei Client, October 15 (Dai Congfei) On the 15th, the National Bureau of Statistics will announce the Consumer Price Index (CPI) for September.

Domestic institutions generally predict that the CPI will continue to fall in September or return to the "1 era".

Institutions forecast an average increase of 1.8%

Dong Lijuan, a senior statistician in the City Department of the National Bureau of Statistics, analyzed at the time that the price of fresh vegetables rose by 6.4%, an increase of 0.1% due to the influence of high temperature and rain.

In addition, pork supply has improved, but demand continues to increase, and prices still rose by 1.2%, a decline of 9.1 percentage points.

For the September CPI data to be announced, Wind data shows that as of October 14, 18 institutions have forecasted an average of 1.8% for September CPI year-on-year increase.

Among them, the maximum forecast value is 2.0% given by Dongxing Securities, and the lowest is 1.6% given by Soochow Securities.

Dongxing Securities, which predicts the highest value, believes that the pig cycle and base factors are still dominant, and the seasonal effects of vegetables and fruits are not exceeded. The CPI is expected to fall to 2% in September.

According to Li Chao, chief economist of Zheshang Securities, the "pig cycle" has entered a downward channel. In September, the wholesale price of pork of the Ministry of Agriculture began to fluctuate downward, and the market price also began to fall after peaking in mid-September.

In addition, Li Chao also pointed out that weather disturbance factors such as heavy rainfall and flood conditions disappeared in September, vegetable growth, picking, and logistics and transportation have gradually returned to normal, fresh vegetable prices have begun to fall from high levels, and non-food prices have also shown certain positive signals, which are moving forward. Level convergence.

Soochow Securities believes that the CPI China-Africa food item is expected to continue the trend of bottoming out and weak rebound. However, because of the "surge" pattern that pork prices started in August last year, the CPI will fall sharply year-on-year following the food item. It is expected that the CPI will fall in September. To about 1.6%.

CICC Liu Liu, Zhang Wenlang and others pointed out that the stock of live pigs and reproductive sows continued to rise. The average wholesale price of pork in September showed a downward trend, coupled with the rapid increase in the base figure in the same period last year, which may lower the year-on-year growth rate of CPI.

On September 30, Yang Zhenhai, director of the Animal Husbandry and Veterinary Bureau of the Ministry of Agriculture and Rural Affairs, publicly stated that with the gradual improvement in the supply of live pigs, the price of pork fluctuated and stabilized in August, and has fallen for four consecutive weeks since September.

Data source: Mapping on the official website of the Ministry of Agriculture and Rural Affairs: Dai Congfei

Regarding the next trend of pork prices, Wang Lingyun, a pig analyst at Zhuochuang Information, believes that with the end of the holiday, animal inspection and breeding companies will continue to work, and the supply of pigs may continue to recover.

Coupled with the colder weather, the difficulty of market transportation is reduced, and the supply of low-priced pigs continues to impact the high-priced market. It is expected that the price of live pigs in the north and south may show a downward trend again.

On September 28, at the annual meeting of China Green Company, Liu Yonghao, chairman of New Hope Group, said, “Pork is beginning to have a downward trend. It is possible to gradually reduce the price to the normal price in the middle of the year or later next year, the common people said. Pork freedom may be realized gradually after the middle of next year."

In addition to pork, the prices of vegetables and fresh fruits are also important factors affecting changes in food prices.

According to data monitored by the Ministry of Agriculture and Rural Affairs, the "vegetable basket" index in September was 125.04, an increase of 2.94% from the previous month.

Zhang Jing, chief vegetable analyst of the agricultural product market analysis and early warning team of the Ministry of Agriculture and Rural Affairs, pointed out that due to the adverse summer weather, the recovery of production in the disaster-stricken areas in the south has been slower than expected; The crop is not smooth, and the price of vegetables in this part of the increase has been relatively obvious, which has driven up the overall price of vegetables.

Regarding future price trends, Fu Linghui, a spokesperson for the National Bureau of Statistics, pointed out that since this year, price changes are mainly affected by food prices, with pork being the most prominent.

He also said that from the perspective of the whole year, with the fall of the CPI carry-over factor in the third and fourth quarters, the trend of consumer prices from the top to the bottom is more obvious. 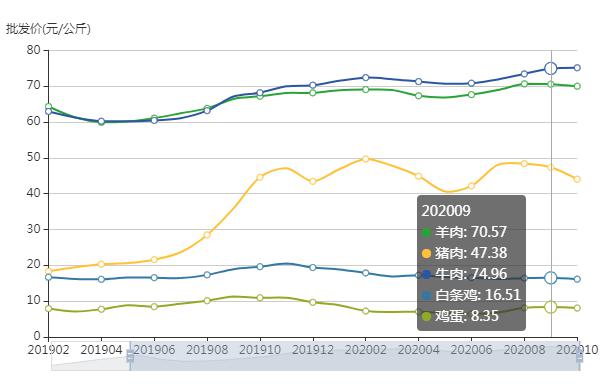 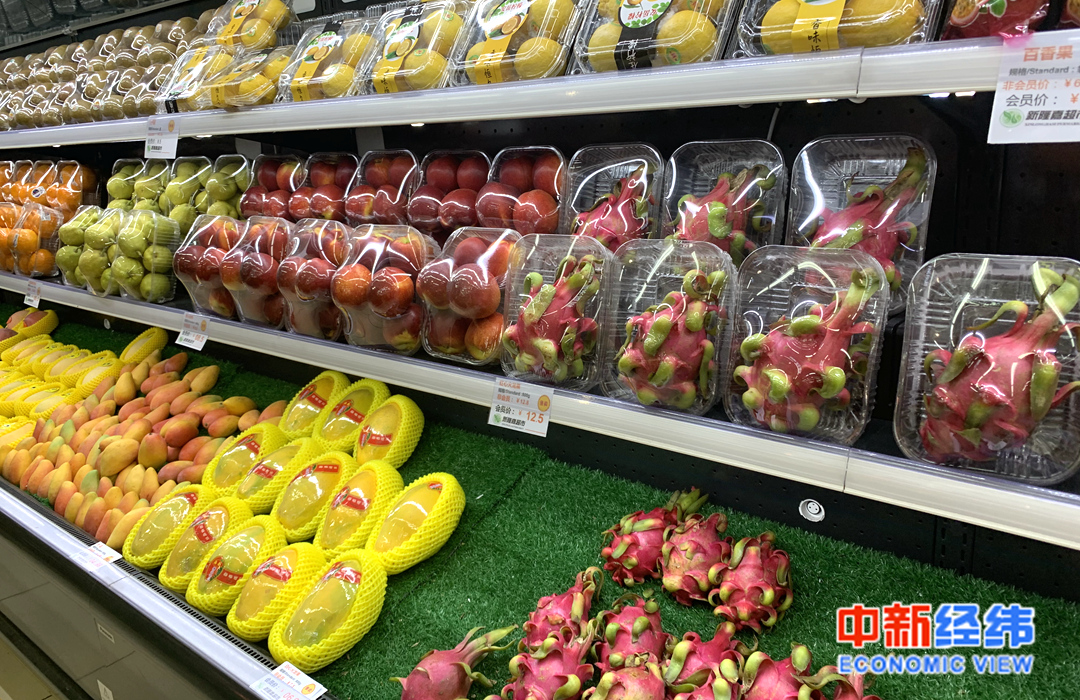 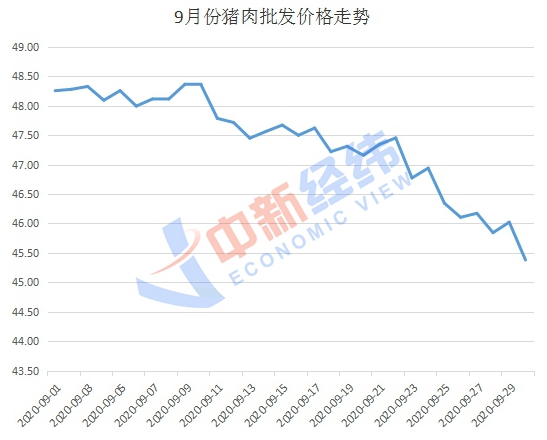 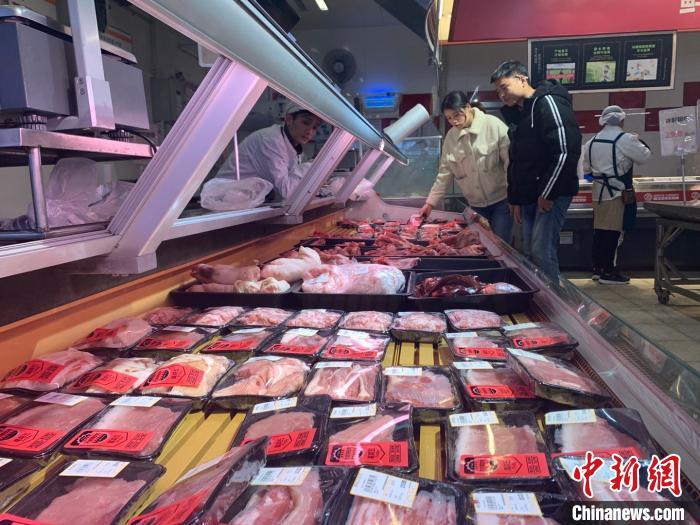 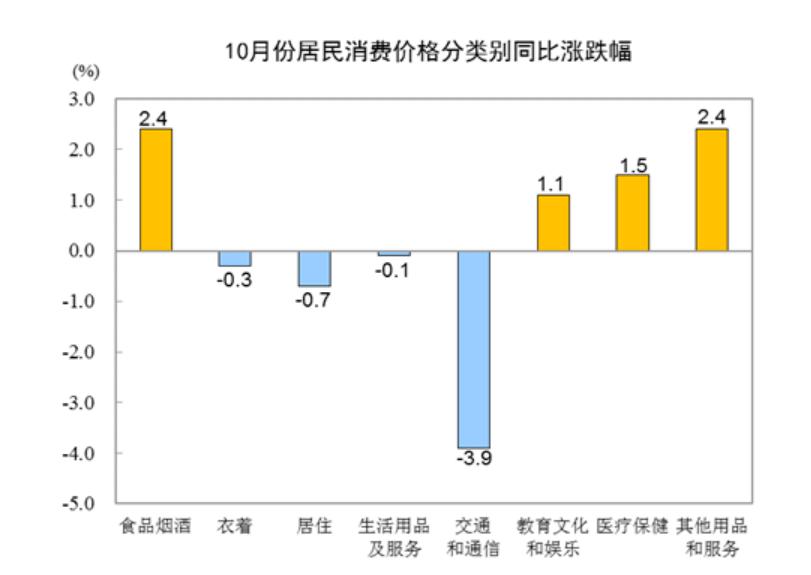 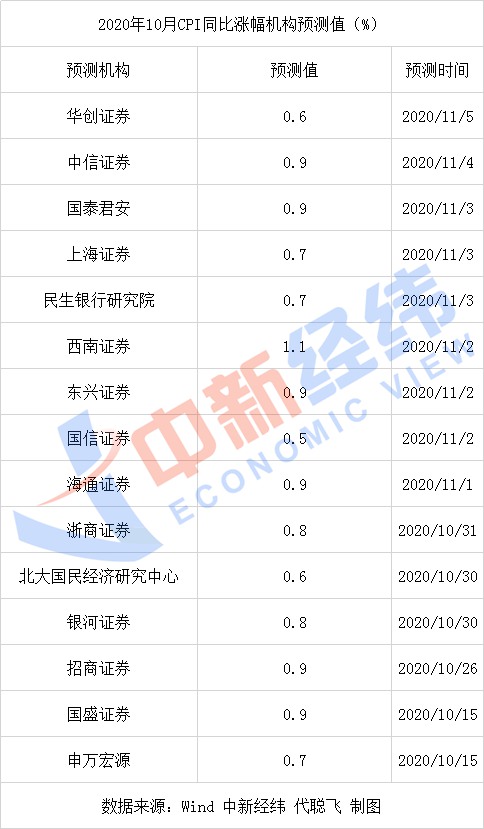 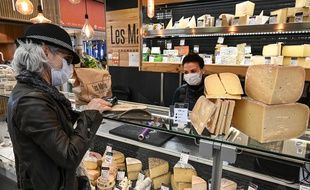 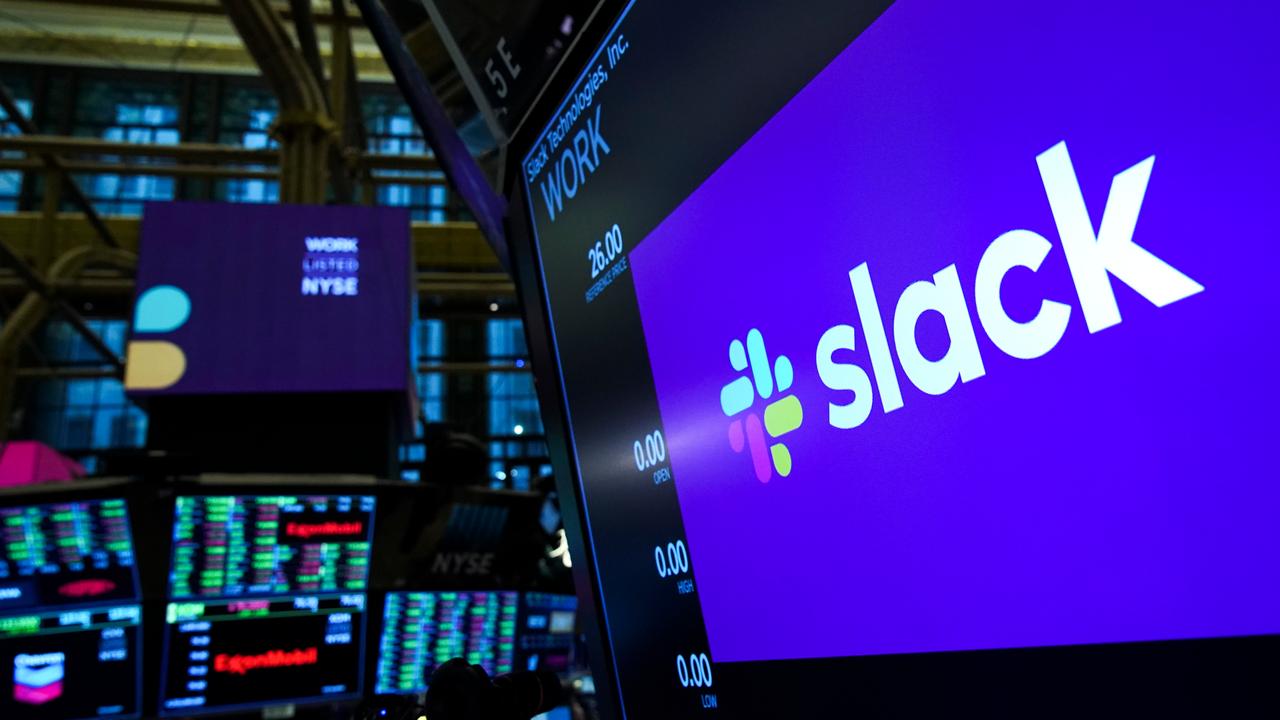 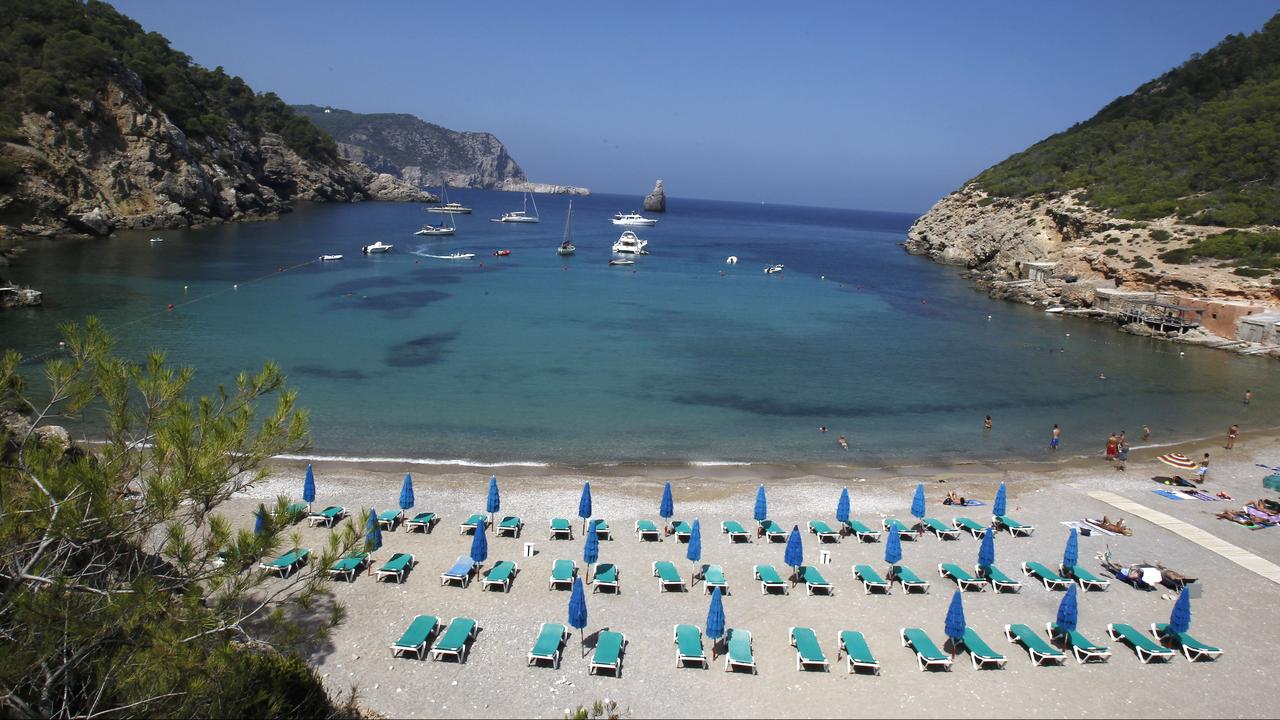 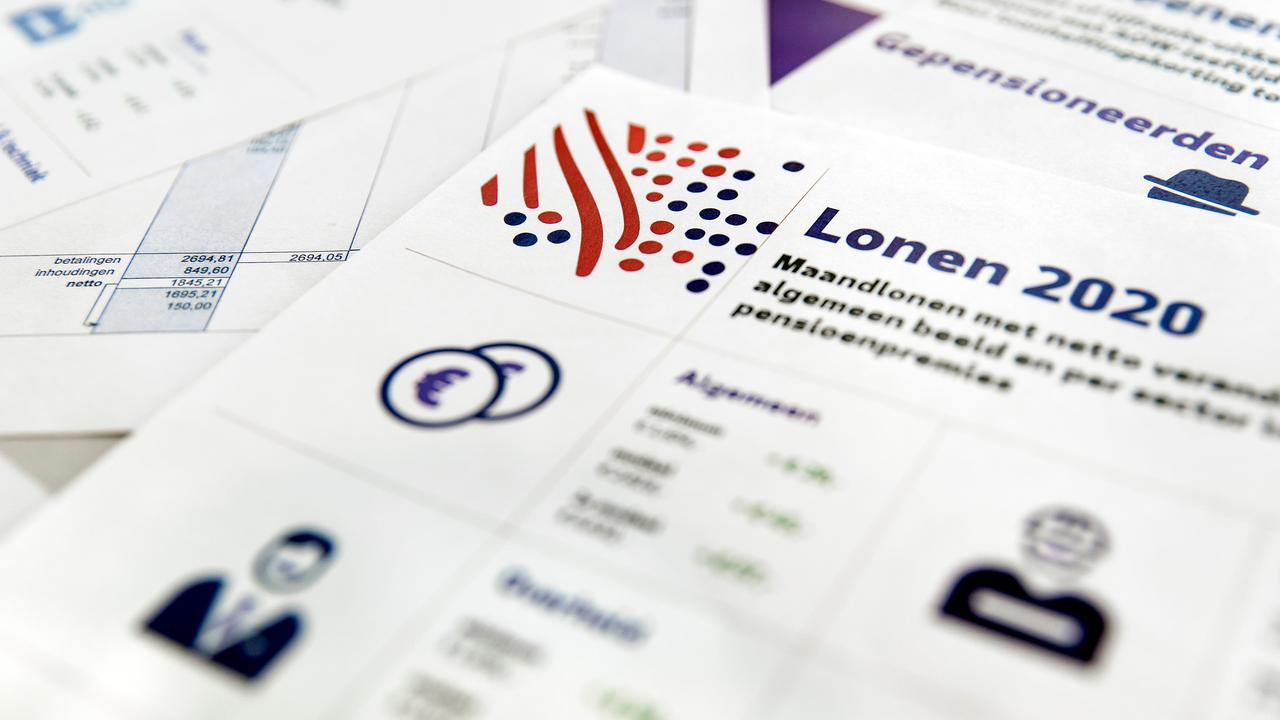 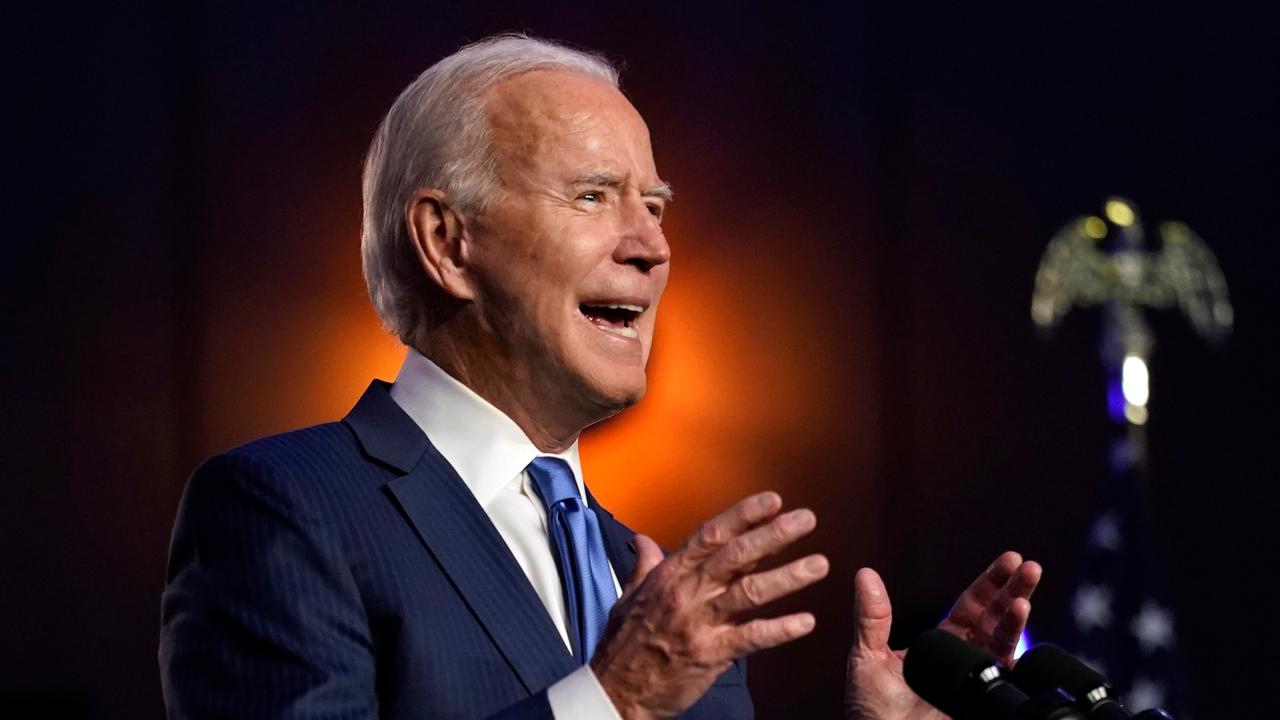