Ministry of Agriculture and Rural Affairs: The autumn grain area is expected to exceed 1.28 billion mu and the harvest is a foregone conclusion 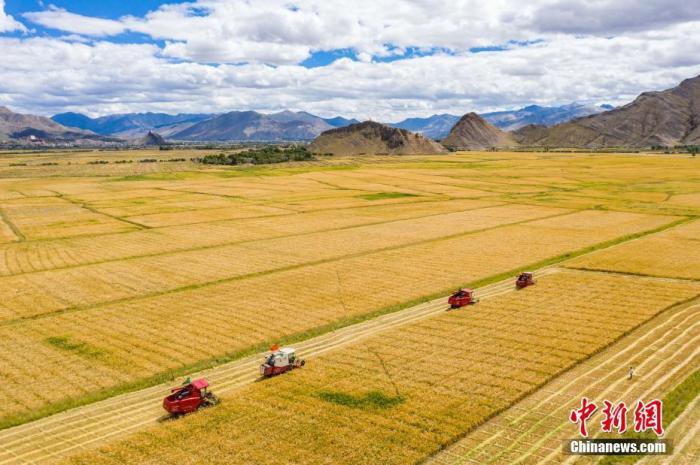 The harvest of autumn grain is a foregone conclusion.

The area of ​​autumn crops is expected to exceed 1.28 billion mu, an increase of 8 million mu over the previous year. The harvest is currently unfolding, and a bumper harvest is a foregone conclusion.

It is estimated that the annual grain area will increase by about 10 million mu, the average yield per mu will increase by nearly 2 kilograms, and the output will stabilize at the level of 1.3 trillion jin for six consecutive years.

The recovery momentum of pigs continues to improve.

Driven by the strong market, pig farms continue to expand their production capacity. According to the Ministry of Agriculture and Rural Affairs, the number of pig farms with an annual output of 500 or more pigs has increased from 161,000 at the beginning of the year to 171,000, capable of breeding sows and pigs. The inventory continues to rise.

The stock of reproductive sows in August increased by 3.5% month-on-month, which was an increase for 11 consecutive months and a year-on-year increase of 37%.

With the accelerated recovery of live pigs and the gradual improvement of pork supply and demand, prices have stabilized.

The production of other livestock and aquatic products continued to remain stable.

As of September 18, the recovery rate and disposal rate of fishing boats withdrawn in key waters of the Yangtze River exceeded 94%. Shanghai, Anhui, Jiangxi, Hubei, Hunan, Guizhou, and Yunnan have basically completed the task of withdrawing fishing boats and fishermen.

The number of fishermen returning from fishing reached 171,000, accounting for 95% of the approved tasks. Among them, 137,000 were implemented social security and 103,000 were converted to employment.

Agricultural investment has grown positively for three consecutive months, and the growth rate has continued to expand. From January to August, fixed asset investment in the primary industry reached 1106.3 billion yuan, a year-on-year increase of 11.5%, an increase of 3.8 percentage points from January to July, showing a clear rebound.

Migrant workers have a good momentum of finding jobs in the vicinity.

Various localities have taken effective measures to orderly promote the resumption of work and production, the resumption of business in the market, and the expansion of local employment of migrant workers returning to their hometowns.

At present, more than 17 million migrant workers who have returned to their hometowns have achieved local employment.

Solid progress was made in the improvement of rural human settlements.

Benchmark the objectives and tasks of the three-year action plan for the improvement of rural human settlements, focus on improving the quality of rural toilets, improve the collection, transportation and disposal system of rural domestic waste, carry out comprehensive pilot projects for the treatment of rural domestic sewage (black and odorous water), and develop villages A large number of villages have significantly improved their appearance during the clean-up operations.

At present, the national rural domestic waste collection, transportation and disposal system has covered more than 90% of administrative villages, the penetration rate of rural sanitary toilets has exceeded 65%, nearly 30% of rural households’ domestic sewage has been effectively controlled, and more than 95% of villages across the country have carried out cleaning based on actual conditions. Action, most villages have basically reached the requirements of clean and tidy.

The Ministry of Agriculture and Rural Affairs pointed out that, generally speaking, the agricultural and rural economy is operating steadily and well, effectively playing the role of the "three rural" ballasts, adding confidence and confidence to the overall stability of economic and social development.

In the next step, we will strengthen field management in the later stage of autumn grain, organize harvesting equipment, storage and drying equipment to carry out timely operations to ensure timely harvest and return of pellets to warehouses; do a solid job in autumn animal epidemic prevention, strengthen the prevention and control of African swine fever, and make unremitting efforts. Live pig production, promote the implementation of policies such as loans and land use, and consolidate the recovery of live pigs; strengthen vocational skills training for returning rural migrant workers, implement entrepreneurial innovation policies, and expand local employment space; promote the increase of local government special debt Agricultural and rural scale, speed up the construction of high-standard farmland, rural living environment improvement and other engineering projects, strive to expand agricultural and rural investment; coordinate and promote various key tasks in agriculture and rural areas, and consolidate the good situation of agricultural and rural economic development.