The second-hand trading platform now has "Haunted House" advertisements: most of them are released by intermediaries, and the platform says that they will be investigated after verification   The Beijing News (trainee reporter Wang Chang and intern Peng Chong) A large amount of information about the buying and selling of "bad houses" appeared on the second-hand trading platform "Xianyu". The ave... 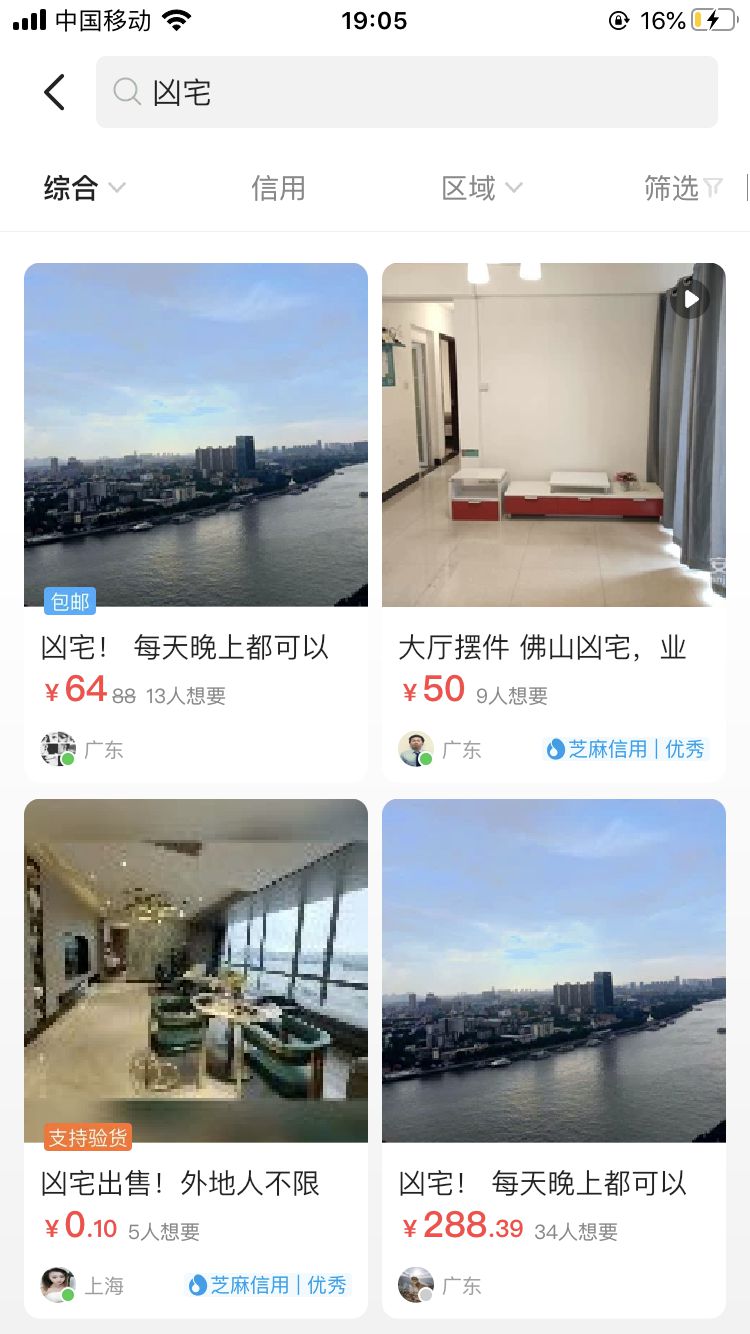 The second-hand trading platform now has "Haunted House" advertisements: most of them are released by intermediaries, and the platform says that they will be investigated after verification

The Beijing News (trainee reporter Wang Chang and intern Peng Chong) A large amount of information about the buying and selling of "bad houses" appeared on the second-hand trading platform "Xianyu". The average price of a 45-square-meter house in first-tier cities is only over 10,000 yuan. A reporter from the Beijing News found that it was not the homeowner who released the information on the sale of the "holy house", but was actually an intermediary, claiming to use it as a means of acquiring customers.

Xianyu platform's customer service responded accordingly that the platform will "strictly stop" the above-mentioned behaviors and will dispose of the accounts involved after verifying the relevant circumstances.

"Haunted homes are sold at low prices, with frequent occurrences of supernatural events, and the owners tearfully throw them out at a low price. The seventy-year-old man is flustered, the child cries in the middle of the night, and the owner can't sleep at night. The remote control that is missing inexplicably? Lights? There is no restriction on the purchase of foreigners, and the total price is as low as four characters. The first choice for investment and bargaining."

Searching for the keyword "Haunted House" in Xianyu, there are many similar transaction information. The usual format is: a rather thrilling copy, accompanied by a picture of the listing, and then indicate the selling points of "low price", "unlimited purchase", "transferable" and other selling points, and then a "homicidal house" resale message is completed. Similar transaction information, the highest page views can exceed 10,000.

A reporter from the Beijing News contacted multiple publishers of "Horrible House" transaction information and found that it was not the homeowner or seller behind the "horror" copy. In fact, most of them were real estate intermediaries. After the buyer proposed the purchase intention based on the low-priced transaction information, the other party Will recommend other properties for various reasons.

The publisher of information on a 45-square-meter "Haunted House" with a price tag of 550,000 and located in Liwan District, Guangzhou is a local real estate agency in Guangzhou. When a reporter from the Beijing News expressed his intention to purchase, the other party said, "This house does not have a real estate certificate. Even in the event of demolition and relocation, compensation is not possible, and it is difficult to change hands, and the risks are high.

In view of this, the aforesaid intermediary stated that “buyers are not recommended to buy such second-hand houses” and recommended new buildings in other areas to the Beijing News reporter.

A real estate agent surnamed Chen told the Beijing News that the "Haunted House" advertisement was a publicity stunt, "Now the market competition is too serious and there is no way."

"There is indeed a picture of this house, but it is not a'murder house'." The agent surnamed Chen said that he had previously published real estate advertisements, but none of them attracted customers, and the exposure was not high. "But my colleague posted a'murder house'. 'Ads have received tens of thousands of clicks, and 30 or 40 people are asked every day.'

A reporter from the Beijing News learned that out of curiosity, many people contact real estate agencies to learn about the story behind the "murder house". At the same time, real estate intermediaries can also attract certain intended customers.

"How can there be so many murderous houses? There are not so many." The agent surnamed Chen revealed that most of the "murderous houses" found in Xianyu were promoted by real estate agencies.

"The'Haunted House' does have the advantage of low prices, but the taxes and fees for second-hand houses, property maintenance funds, and transfer fees are relatively high. Moreover, it is very troublesome to sell afterwards, and no one wants to rent." The agent surnamed Chen told A reporter from the Beijing News, "Generally speaking, the price of a haunted house is about 200,000 yuan lower than the market price, but it depends on the location and is not fixed. Moreover, there are really few real haunted houses."

Lawyer Zhao Liangshan said that if real estate agencies use advertising slogans that do not match the actual content to mislead consumers or increase click-through rates, exposure, and customer volume, they will be suspected of false publicity. Yu Chao, a lawyer at Jingheng Law Firm, also stated that, according to Article 45 of the Consumer Rights Protection Law, consumers can request the administrative department to impose punishment if advertising operators and publishers publish false advertisements.

A reporter from the Beijing News contacted Xianyu's customer service on this basis. The other party stated that the platform will severely stop the above-mentioned actions, "Once the published content is verified to be abnormal, the relevant account will be disposed of."