Chinanews client, Beijing, August 12 (Zuo Yukun) Recently, do you feel that your hands are tight, your wallet is deflated, and the pace of buying and buying has eased?   From being obsessed with big names to pursuing cost-effectiveness, from spending a lot of money on brand premiums to finding a coupon to "grow wool", many people think that they have "consumption downgraded", but in fact, this ... 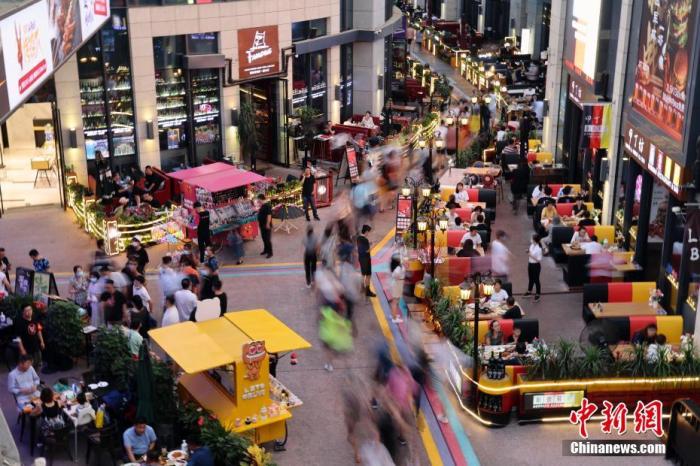 Chinanews client, Beijing, August 12 (Zuo Yukun) Recently, do you feel that your hands are tight, your wallet is deflated, and the pace of buying and buying has eased?

From being obsessed with big names to pursuing cost-effectiveness, from spending a lot of money on brand premiums to finding a coupon to "grow wool", many people think that they have "consumption downgraded", but in fact, this may be just an "upgrade in downgrade" ".

Luxury or frugality, have your spending habits changed?

"My spending power this year can be said to have plummeted, and I always feel guilty when I am crazy about "chopping hands". Thinking about the months of the epidemic, I only had a basic salary to make ends meet. Every day I picked my feet at home and waited for work to resume, and my savings grew every day. Less...that kind of fear, I don't want to have it again in this life." Wang Wei (pseudonym) who works in Beijing may be a portrayal of many people.

Under the epidemic, it is impossible to go out to eat, drink and have fun, and it is reasonable for consumption to drop sharply. According to data from the National Bureau of Statistics, the total retail sales of consumer goods in the first half of the year fell 11.4% year-on-year, and the national per capita consumption expenditure actually fell by 9.3%.

Why did the anticipated large-scale “retaliatory consumption” not arrive as expected as the situation of the epidemic gradually improved. The majority of netizens said: It's not that they don't want to, but... lack of money.

Empty bank cards, empty wallets, empty WeChat wallets, and empty Alipay are the economic conditions of many young people who "live in the moment". The sudden outbreak of the epidemic has made many people feel the pressure of zero deposits like never before, and they are determined to bid farewell to this life of “all four”.

“The epidemic may have a strong pull-up force for preventive savings.” Pan Xiangdong, chief economist of New Era Securities, believes that disasters will cause severe fluctuations in future income and expenditures. In order to have more resources for themselves and their families to cope with such insecurity. With certainty, people will cut consumption and increase precautionary savings for emergencies.

Data map: A banknote counter at a bank in Gansu is counting the renminbi. Photo by Ai Qinglong

"It is really necessary to save money. The figures in the deposit are indeed a sense of security. Avoid unnecessary expenses in the future! Watch out for consumerism traps! Watch less Taobao and exercise more!" Wang Wei gave herself a decision the day before the official return to work Such a "small goal".

When people's consumption habits are being reshuffled, there is a view that the medium and long-term economic growth and consumption growth have slowed down as a whole, and the first- and second-tier cities with high per capita income in China have begun to enter the "fourth consumption era"-consumption Return to rationality, and the rise of simplicity and parity.

What is the fourth consumer era?

The Japanese consumer research expert Miura Exhibition summarized the four "eras" of Japanese consumer trends in his book "The Fourth Consumer Era". Among them, the characteristics of the fourth consumption era are: consumers have shifted from pursuing materialism and brand effects in the past to emphasizing experience, and are unwilling to pay for excessive brand premiums. Products featuring simplicity and sharing are welcomed.

Before the epidemic, my country was actually more in line with the characteristics of the third consumer era: branding and high-end, such as buying fashion products, not only met their own needs, but also needed the approval and appreciation of others. The Wife Circle in the hit TV series "Thirty Only" is a typical representative of the third consumer era, which pursues big names, demonstrates identities, and compares with each other.

Recently, the two luxury goods giants LVMH and Kering have both released their first-half results. Kering's profit fell 58% year-on-year, and LVMH's operating profit fell 68%. As one of the few remaining players in luxury e-commerce, Secoo also reported losses for the first time after 14 consecutive quarters of profitability.

“The epidemic is indeed a great influence. The retail industry has suffered a great loss this year.” A brand salesperson in the Sanlitun business district in Beijing told Chinanews.com: “I thought there would be'retaliatory consumption' after the epidemic, but during the holidays and in-app purchases. Ah did not achieve the expected results."

Just spend what you need, save what you shouldn't. While waiting for "retaliatory consumption" after the epidemic, a more rational and more focused consumption pattern has begun to quietly lead a new wave of consumption trends.

According to McKinsey's "2020 China Consumer Survey Report", 60% of the respondents said that even if they are rich, they want to spend their money on the blade. The report pointed out that there have been obvious changes in mainstream consumption concepts in first-tier cities such as Beijing, Shanghai, Guangzhou: Everyone pays more attention to cost-effectiveness, and will significantly reduce expenditure on non-essential items.

"Things are not too expensive, they can be used" has become a common idea of ​​many people in the post-epidemic period, and may be heralding the arrival of the fourth consumer era.

The fourth consumer era is sprouting, and many voices believe that this will bring important development opportunities to the rise of local affordable brands in my country. "my country's consumer market will see price downgrades and quality upgrades more clearly, and people's consumption will have new changes. For enterprises with high-quality and low-price routes, this is an opportunity for expansion."

According to media reports, after Japan has entered the fourth consumer era, consumers are no longer willing to pay for excessively high brand premiums, and instead focus on pursuing consumer experience. The minimalist products represented by Uniqlo have begun to lead the trend.

Uniqlo, which focuses on "high quality and low price," sales in Japan in June and July this year increased by 26% and 4% respectively over the same period last year. In the mourning apparel industry, it is undoubtedly a very beautiful report card.

Nowadays, many brands in my country are also showing signs of moving closer to the trend of high cost performance.

According to data from Sensor Tower, a mobile application data analysis platform, Pinduoduo ranked 9th among the top ten global downloads of the Apple App Store in July, becoming the only Chinese application on the list. Pinduoduo's quarterly financial results show that its annual number of active buyers has reached 628 million.

It is worth noting that these 628 million Pinduoduo buyers are no longer the "middle-aged and elderly people" in the stereotype.

"It's not about not spending money, but about spending money selectively." Under the strict guard of the e-commerce giant, Pinduoduo used its low-priced genes to successfully "cut the wallets of young people in the post-epidemic era". Let its rival Ali launched a "Taobao Special Edition" to fight with it.

The cost-effective milk tea is more popular, and it also verifies the advent of the "fourth consumer era" from another aspect.

Not long ago, "drinking milk tea" ranked second in the "first thing after the epidemic", which triggered 136,000 people to participate in the Weibo poll. It is not difficult to see the status of milk tea in the hearts of young consumers.

And this year's milk tea industry's Internet celebrity dark horse, Michelle Ice City, known as "Milk Tea Industry Pinduoduo", also focuses on high cost performance. The average product price is about 6 yuan, but it earned 6.5 billion yuan in 2019. The total number of stores nationwide has exceeded 10,000, which is beyond the reach of any milk tea brand.

What’s interesting is that the top two brands that have always followed the “light luxury style” also made low-price brands: Hey Tea launched a high-profile “faulty low-price” sub-brand “Hey Xiaocha”, and Naixue’s tea is in In the first half of the year, a variety of products below RMB 20 were launched. Price drop has undoubtedly become an important measure for many industries to find new volume.

What is your consumption outlook in the post-epidemic era? (Finish)