Why could France economically drool more than the others?

France could experience the worst recession in the world in 2020 because of the health crisis, the country is in fact affected by its strengths 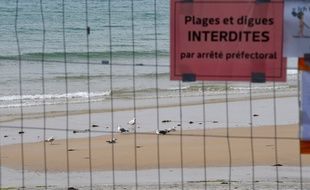 Tourism, pillar of the French economy, was the first victim of the health crisis. (archives) - DAMIEN MEYER / AFP

Less than 20% of the intensive care beds are occupied by Covid-19 patients (compared to 130% at the worst of the crisis, two months ago), the deconfinement will know its third stage in ten days… In short, the France has passed its (first) epidemic wave linked to the new coronavirus. Only, before a hypothetical second wave, a very real second blade is already looming: the economic crisis.

The OECD announced yesterday that France could experience a recession of 11.4 to 14.1% of its GDP in 2020. An absolutely exceptional and even unprecedented level on the surface of the planet: it is in France, just ahead Italy and Spain, however more affected by the epidemic, than the economic crisis could be the strongest. 20 Minutes tried to find out why.

The French economy is there. This fall, linked to confinement for almost eight weeks, is almost mechanical. "If you have 35% of your economy on hiatus for two months, it will not make up for the following months," explains simply the economist specialist in the euro zone interviewed by 20 Minutes , Stéphanie Villers. Putting the economy under cover has a cost. "

Anne-Sophie Alsif, chief economist of the Bureau for Economic Information and Forecasting (BIPE), agrees: “Our forecasts are in line with OECD and government figures, around 11%. Overall, the OECD forecasts that the world economy will shrink by 6% this year. It will be even worse in the euro zone (between 9 and 11%). The context is therefore gloomy for everyone.

These figures are really credible because the data from INSEE is robust. “It is one of the most efficient and ingenious institutes of economic statistics in the world. It is likely that the other institutes will have to revise their forecasts downward while ours is undoubtedly closer to reality ”, specifies Stéphanie Villers.

Why is it worse in France?

It is first of all one of the countries where confinement has been the longest, almost two months therefore, and where deconfinement is most progressive. In addition, this health confinement affects all the key points or strengths of the French economy in normal times. To find out, just look at where the government is going: it has already presented a plan for the automobile, for tourism and for aeronautics. A stimulus plan for consumption must follow at the start of the school year.

Household consumption is the main driver of tri-color growth. “This is also the case for Spain and Italy,” explains Anne-Sophie Alsif. Conversely, other countries are more export oriented, such as Germany. During the confinement, with the closure of many businesses, the very capacity to consume was greatly reduced. The result was immediate: in March, with only two weeks of confinement, we returned to the level of consumption in the year 2000. A dizzying fall.

Tourism has been undermined in its foundations by containment. The sector is very important in France, as for Spain and Italy. “It is our 'French art of living', as the president says, that was touched in the heart,” describes Stéphanie Villers. Because, if we do not immediately find the foreign tourists who come by the millions every year to France, internal tourism alone represents "two thirds of tourism receipts. Without a total reopening of the sector, we will not find the pre-crisis levels ”.

As a corollary, the aeronautical industry finds itself grounded. And more generally the export sectors of France that are chemicals, food and luxury. “It is true that in normal times our trade balance is already in deficit. But it is the sectors where France is well positioned that have been affected ”, specifies Anne-Sophie Alsif. Then come the automobile, France is not Germany but still has an important sector. Construction, which accounts for 6% of French GDP, was also globally halted for two months.

What strengths to rebound?

In its report, the OECD sees a very clear recovery, and even stronger than elsewhere, in France in 2021. But it will a priori be necessary to wait until the end of 2022, in the current state of things, to regain the economic level of the beginning of the year 2020. It must be said that France also has some strong points that all its neighbors do not have. Starting with the social protection system.

The economic shock is violent, but it is all the same lessened by the welfare state. He has been embodied a lot for three months by the partial unemployment system, "one of the most generous" in the world according to Stéphanie Villers. “Certainly, all people put on partial unemployment will not find their job but a large majority anyway. It's not like when you are unemployed in the United States, almost without income and without visibility, even if the job market is more flexible. "

The partial unemployment system - expensive but necessary for our two economists - has made it possible to conserve the human capital of companies. This is what will allow them to leave faster than if they had to hire and train new people. Above all, it helped to preserve the purchasing power of households: now, as we have understood, the recovery in consumption will be key in the months to come. "Savings doubled during confinement, it's colossal! Households have room for maneuver in consumption, ”judges Anne-Sophie Alsif. 55 billion euros have been placed on passbooks A in the past few months.

It remains to be seen whether households will have enough confidence in the future to heat the card. Because without that, no return on business investment. The holidays in France for the 10 to 14 million French men and women who usually go abroad are a first lever. But the vagueness remains while everyone anticipates a sharp rise in unemployment. "We will see more clearly when there is a vaccine or treatment," says Stéphane Villers. Meanwhile the risk is that the health crisis continues to plague the economy. "

Tourism, aeronautics… The government plans a budget of 40 billion euros for sectors in difficulty