China News Service, Guangzhou, June 8th (Tang Guijiang, Chen Lin, Mo Wulang) A reporter learned on the 8th that under the guidance of the General Administration of Customs, the Guangdong Branch of the General Administration of Customs organized the Neihai Province to issue the "Customs in Guangdong Province to fully implement the deployment of the two sessions" Several Measures for Supporting Gu... 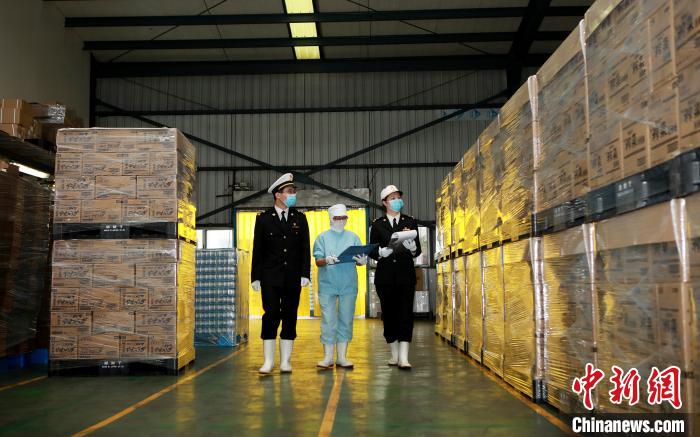 The customs officers of Gongbei Customs went to the enterprise to understand the resumption of production and production. Photo by Yu Bo

According to the person in charge of the Guangdong Branch of the General Administration of Customs, from the "Ten Measures for Promoting the Stable Growth of Foreign Trade in Response to the Epidemic Situation" issued by the General Administration of Customs in February this year, the Guangdong Provincial Government issued "Several Measures to Promote the Stable Growth of Foreign Trade in Guangdong Province" in March. All played an important role in promoting the stability of foreign trade, and Guangdong's foreign trade import and export showed signs of stabilization.

According to statistics, from January to April this year, Guangdong’s foreign trade imports and exports reached 1.92 trillion yuan, a decrease of 9.8% from the same period last year (a 4.9% national decline), a decrease of 2 percentage points from the first quarter.

The eight customs measures launched by the customs in Guangdong Province in a timely manner are related to supporting enterprises to expand imports and exports, promoting cross-border trade facilitation, stabilizing the development of processing trade, supporting the construction of the Guangdong-Hong Kong-Macao Greater Bay Area, the Pilot Free Trade Zone and the comprehensive protection zone, and promoting cross-border trade. There are a total of 50 specific tasks in various fields closely related to the development of overseas e-commerce and Guangdong’s stabilization of foreign capital and foreign trade.

Do a solid job of stabilizing foreign trade and foreign investment

In terms of supporting enterprises to expand imports and exports, Guangdong Customs no longer appraise the weight of batches of coal, petroleum, crude oil and other bulk commodities, and adjust to apply for implementation by enterprises; implement "first release after inspection" for specific imported mineral products , The goods can be picked up after meeting the requirements of on-site inspection and quarantine at the port; for major projects such as Huizhou Exxon Mobil, Jieyang Petrochemical, and Zhanjiang BASF, a special customs work team is established to continuously track the progress of the project. In order to better serve SMEs, support the online Canton Fair, strengthen measures to respond to foreign technical trade measures, guide more foreign trade comprehensive service enterprises to become advanced customs certification enterprises, and support SMEs to develop export markets through market procurement.

A series of reform measures such as "optimized procedures, reduced links, simplified procedures, and reduced costs" issued by the General Administration of Customs were further refined and implemented. In order to further speed up the port inspection and release, we put forward key measures such as optimizing the declaration mode, speeding up the port inspection and release, and implementing first release and then tax. In order to stabilize the development of processing trade, we propose to temporarily suspend tax deferred interest, clarify the scope of guarantee-free application, simplify extension procedures, and promote online auction of scraps, etc.; to promote the development of cross-border e-commerce, promote the new cross-border e-commerce comprehensive trial area to start business as soon as possible 2. Smoothing the return channels of cross-border e-commerce, supporting Dongguan to take the lead in conducting pilot projects of cross-border e-commerce B2B exports, etc. Mainly through the optimization process, reduce links, simplify procedures, reduce costs, comprehensively reduce the cost of import and export customs clearance.

Focusing on serving the Guangdong-Hong Kong-Macao Greater Bay Area, the Shenzhen Pioneer Demonstration Area, and the construction of the Guangdong Free Trade Zone, the Customs Innovation Support Initiative in Guangdong Province was integrated, and it was proposed to facilitate the cross-border entry of scientific research equipment into the nine cities of the Greater Bay Area for use and support Guangdong-Hong Kong-Macao Greater Bay Area "vegetable baskets", the implementation of advanced zone customs declaration, support for shipping transit consolidation, allowing goods under multiple trading methods to achieve "same warehouse storage, same warehouse allocation, and same warehouse operation", supporting Meizhou Zhanjiang and other comprehensive protection The district will accelerate the application for construction, fully implement the "general taxpayer qualification", implement the "first-entry zone and later-test" for animal and plant products, and implement "release after sampling" for imported food.

Actively maintain the order of import and export trade

Guide enterprises to take the initiative to disclose and improve self-correction mechanisms, and promote corporate law-abiding and self-discipline; in accordance with the deployment of the "Guomenlijian 2020" action, continue to crack down on import and export smuggling; strengthen the quality and safety control of epidemic prevention materials, and deal with illegal activities in accordance with laws and regulations; Focus on cracking down on illegal import and export infringement activities that endanger the health and safety of the public, and deepen the promotion of multi-party cooperation with public security and market supervision departments to achieve a chain-style crackdown.

The person in charge of the Guangdong Branch said that the next step of the Guangdong Customs will follow up and evaluate the implementation of various measures in a timely manner, coordinate and solve the key, difficult and plugging problems in the work, ensure the implementation of various measures and tasks, and release the policy to the maximum extent. Dividends, contribute to the overall planning of normal epidemic prevention and control and promote the stable and high-quality development of foreign trade. (Finish)