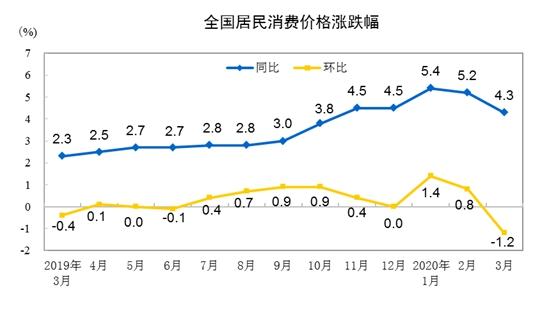 China News Service Client, Beijing, May 12 (Xie Yiguan) The National Bureau of Statistics will announce the National Consumer Price Index (CPI) for April on the 12th. The market generally expects that the CPI increase in April may be reduced year-on-year or returned to "3 era".

CPI chart. From the National Bureau of Statistics

The resumption of production and production gradually accelerated, and measures to maintain supply and stabilize prices continued to intensify, pushing the growth rate of CPI back in March. In March, the CPI rose by 4.3% year-on-year, a decrease of 0.9 percentage points from the previous month, and fell below 5% for the first time this year.

How about the CPI increase in April? According to Wind information statistics, the average forecast value of 16 research institutions for the year-on-year increase of CPI in April was 3.7%. Among them, the predicted maximum value is 4.6% and the minimum value is 3.1%. If the above average forecast value is fulfilled, the CPI increase in April will be reduced by 0.6 percentage points from March, and will return to the "3 era" after an interval of 6 months.

According to the monitoring of the Ministry of Agriculture and Rural Affairs, the "Agricultural Wholesale Price 200 Index" in April 2020 was 123.42, a decrease of 5.93 points from the previous month; an increase of 7.40 points from the same period last year.

On the pork price, according to the National Development and Reform Commission, on April 29, the price of pork (lean meat) in 36 large and medium cities was 29.92 yuan / jin, which fell below 30 yuan / jin for the first time since mid-October 2019. Compared with the high point, it decreased by 13.6%.

“Food prices have generally declined significantly since April. Pork supply has improved significantly, and pork wholesale prices have continued to fall.” Liu Xuezhi, senior researcher at the Bank of Communications ’Financial Research Center, said that the current domestic food supply and demand are stable, especially grains, wheat and other staple food reserves are sufficient 1. The self-sufficiency rate is high, and food prices will not be significantly affected by the global spread of the epidemic and insect damage.

"International crude oil prices have fallen sharply, and commodity prices have fallen, gradually transmitted to consumer terminals, bringing down the cost of domestic fuel oil and some industrial consumer goods, and promoting non-food prices." Liu Xuezhi pointed out that due to the tailing factor of 3.24% in April, the ratio It was down 0.1 percentage points last month. Based on the above factors, it is expected that the April CPI year-on-year increase will decline further, possibly between 3.5% and 3.8%, with a median value of 3.6%.

Data map: The flow of people in the Hohhot vegetable market is surging. Photo by Liu Wenhua

What is the future trend of CPI increase?

From May 1 to May 9, the "Agricultural Wholesale Price 200 Index" was 119.13, a decrease of 2.46 points from the previous week and an increase of 4 points from the same period last year. The prices of vegetables have dropped overall, the average wholesale prices of pork and eggs have continued to decline, and the prices of fruits have increased month-on-month.

"In the future, there will be a sufficient supply of vegetables, and the supply of meat is facing the peak season," Cao Heping, a professor at the School of Economics at Peking University, told reporters that considering seasonal factors, it is expected that the year-on-year increase in CPI in May and June will fall to 4% or below.

"At present, domestic production and supply are recovering faster. In terms of food prices, due to the continuous recovery of hog production capacity since October last year, adding to the base factor, the price of pigs will fall faster in the second half of this year. In addition, the price of fruit in the middle of the year will also be Faster decline will help CPI fall. "Huachuang Securities predicts that this year's CPI will show a downward trend with a slide, with the annual center around 3%.

Yan Pengcheng, director of the National Development and Reform Commission ’s National Economic Integration Department, said at a press conference on April 20 that, overall, the impact of the epidemic on China ’s consumer prices is short-term, and the foundation for the stable operation of China ’s prices remains solid. With the further recovery of the production and living order of the whole society, the CPI increase is expected to continue to decline, and the whole year will show a trend of "high before low". (Finish)